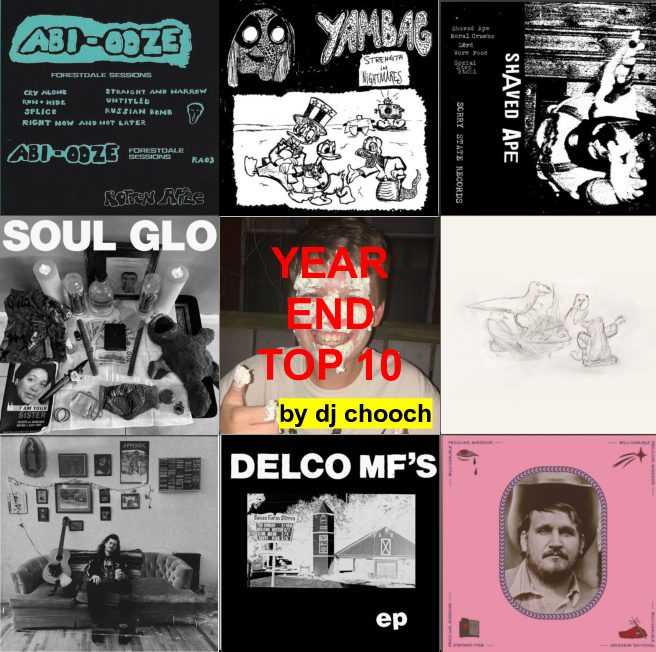 Every year albums come out. This year was no exception. And I listened to every single one. These 10 were the best.

Had not even heard of this band until an hour ago, and put them on as I wrote this because @u2_is_a_government _drone said it was his AOTY. Now I’m shaking, sweating, taking my pants off, rearranging my particles, etc… This rips. FAVE TRACK: “Intrige und Libido”

3. Dragon New Warm Mountain I Believe In You – Big Thief

Uh, duh. Who isn’t gonna include this one? 20 songs and each one makes a mark in its own distinct way. I like the one about the grandma. FAVE TRACK: “Red Moon”

I truly lack the mental power to wrap my brain around this album. The speed, the lyricism, the versatility…… the speed. I could see some really cool bands citing this as an influence a few years down the road. FAVE TRACK: “Jump!! (Or Get Jumped!!!)((by the future))”

5. Under the Table – Nelson Hogan

Sad cowboy tape music. For when you’re driving home from the hardcore show thinking about quitting it all and joining the fire watch patrol up in some mountain. Part of me wishes I knew of something else that sounds like this, another part is glad to have happened upon something so singular. FAVE TRACK: “brakes”

This is like Joy Division if Joy Division made music I liked. Bonus points for singing drummer. Bonus bonus points for the bassist’s wrist veins, which looked like they were gonna pop out of his skin when they played in Philly (dude if you read this, that’s genuinely a compliment). FAVE TRACK: “Static”

A little old a little new a lotta good. Some stuff from the dollar bins, some from the back porch, other shit from the gas station bathrooms of the US of A. All of it from the heart. Willi knows how to speak the truth: “the designated hitter is a goddamned lie.” FAVE TRACK: “The Down and Back”

YEOWCH!!! 7 tracks, 8 beautiful minutes. How many songs ever really need to be longer than 40 seconds? Not many if you can play like these guys. FAVE TRACK: “Psyop”

One man, 4-track hardcore. The first song made my hair fall out. The second made my organs hemorrhage. Then I blacked out so don’t asked what the rest of the tape sounds like. FAVE TRACK: “Shaved Ape”

This one is so up my alley, it pulled a switchblade on me and told me to hand over my wallet or else. Ramonesy enough to let you know they know what’s up. Really doing its own thing though. Plus there’s a Shangri-Las cover! FAVE TRACK: “Cry Alone”

Bet you didn’t notice there were two number 10s, huh? Well, this one’s worth cheating for. K Records-y as hell and sure to put a smile on your face. FAVE TRACK: “Playing Possum”

OTHER RECORDS I ALSO LIKED