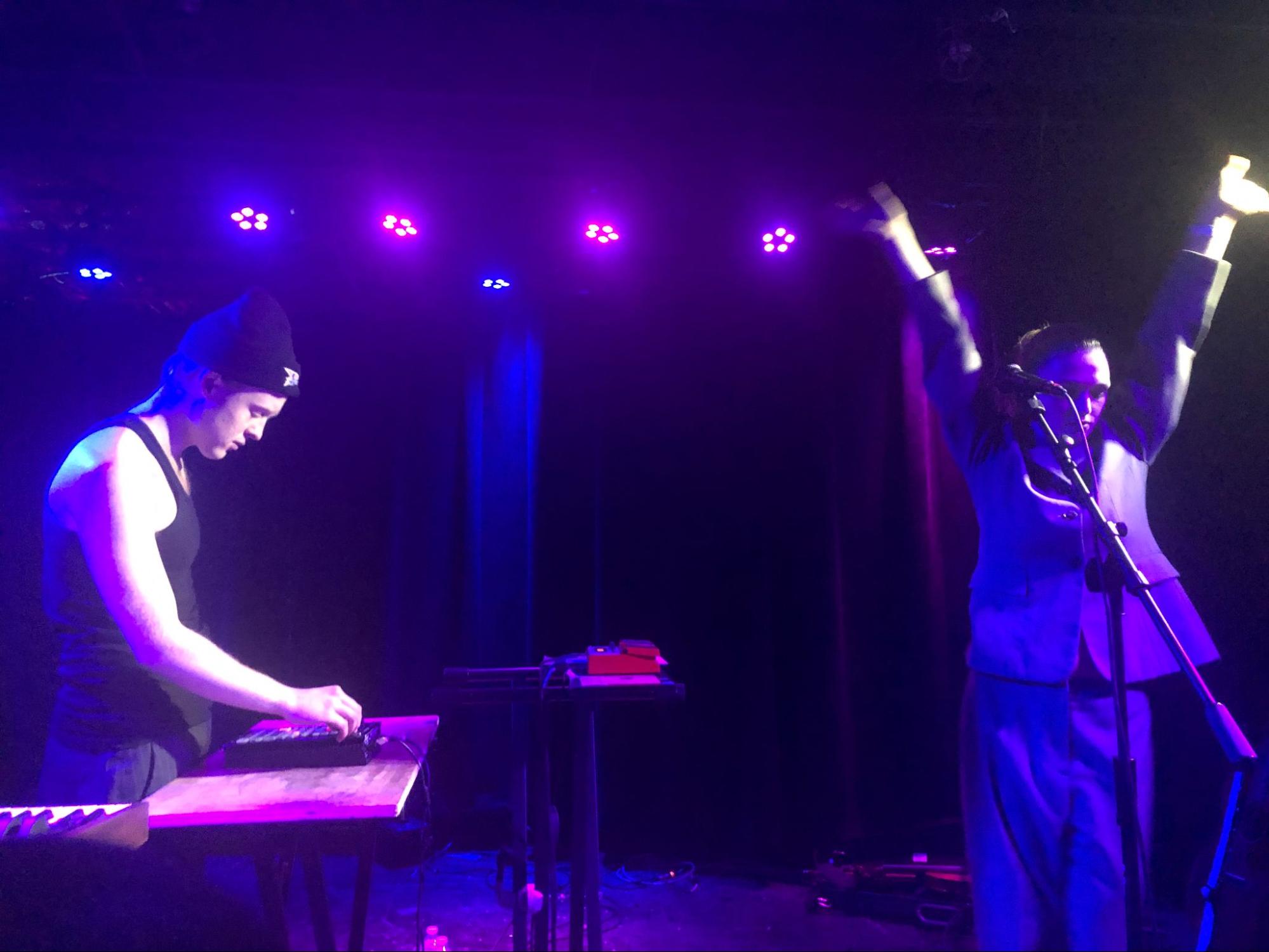 If you ever receive the opportunity to see one of the best new artists in the world in the city where you’re living for the foreseeable future for one night only, to say no should be a crime. Take, for instance, emerging UK electropop duo Jockstrap’s show at 7th Street Entry this most recent Sunday. The odds were not in my favor to make it to the show in the first place, given I had a five AM flight that morning, but through the power of concert bootlegs and coffee, nothing could stop me from making my way downtown, shaking in my boots in the cold to see the two on a stop for their first American tour. I had been following Jockstrap for some time prior to this show, living in the UK, being mostly familiar with vocalist Georgia Ellery’s work in UK-based post-punk group Black Country, New Road, and having heard snippets of Taylor Skye’s remixes in indie clubs and from my art school friends who raved about him. This is incredibly far from post-punk.

Jockstrap’s most recent LP, I Love You Jennifer B, hot off the heels of several smaller EPs, is quite possibly one of the most brilliant pieces of pop music released in the last five years and an album of the year (and likely the decade). It is glitchy, chaotic, intimate, ethereal, and, to summarize, unlike any record I have ever listened to. Arriving at 7th Street, I had incredibly high expectations, and the live show blew my expectations out of the water.

Of course, before talking about Jockstrap, I feel compelled to talk about the opener, ernest rareberrg, a New York City based artist who I admittedly had never heard of prior to Sunday. They immediately kicked up the energy with bright and fun songs and intricate performances (including a lamp which commanded the crowd into a frenzy) which managed to invoke the shoegaze of my angsty years and ethereal bedroom pop. Keep an eye on ernest rareberrg, they’re definitely going places soon.

Opening with the heavy opener from their LP, Neon, the duo immediately kicked the energy up with tracks like Jennifer B (“I can be a stripper if you want me to”) “Greatest Hits” (“imagine I’m the Madonna / dressed in blue / No – dressed in pink!)”, and Debra (“looked at the moon, pressed X at the stars”). The instrumentation was at once theatrical and glamorous, yet resembled something you’d find in a European club, which filled the small and cramped crowd with an energy I haven’t seen at a show in years. Mixed within these energetic pieces were slow and intimate pieces, which brought the crowd together in a quiet unison. A highlight of these slower ones was “The City”, which is mostly because I started weeping for no discernable reason. This moment was promptly interrupted by their hits “I Want Another Affair” and “50/50”, wherein the entire crowd collapsed into a jumping mass of pure release.

Jockstrap is at once something deeply personal and something entirely new in the field of popular music. Ellery’s lyricism is confessional and meditative, Skye’s production masterfully intricate. This is the kind of music I could only dream of creating, let alone existing, and feel incredibly lucky to have been able to witness it live. I suspect they’re going to be very popular within the year. Overall, I’d say that seeing the duo was probably the most fun I’d had at a concert in a very long time. If you see that Jockstrap’s in town, drop whatever it is you’re doing and see them. Alternatively, if they aren’t playing your city, drop whatever you’re doing, whatever you’re working on, whatever you’re listening to, and listen to their records at the loudest volume possible at home. Dance like there’s no tomorrow. See you on the other side.
Check out my show: Time Travel is Lonely, every Thursday from 10pm-12am!