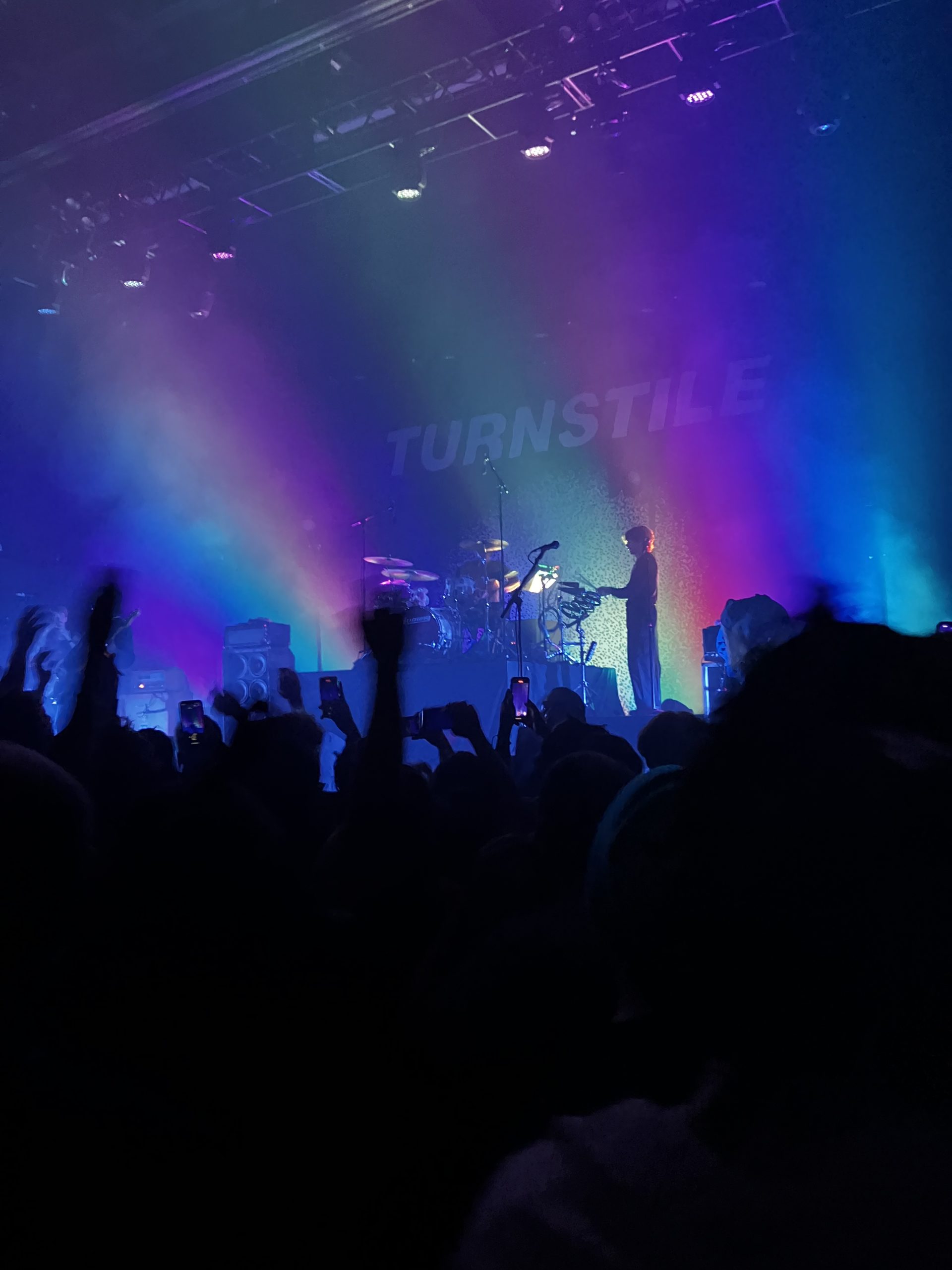 If you’ve ever asked yourself, “Is there any concert worth an hour bus and train ride to downtown Minneapolis on a Tuesday,” the answer is Turnstile’s show at The Fillmore with JPEGMAFIA and Snail Mail opening. I have to admit, this pairing sounded a little incongruous when I purchased my ticket, but these artists ended up complementing each other perfectly. This show was the kind that makes you wake up the next day wishing you could relive it over and over. I’m not kidding, it was THAT good.

I arrived about 40 minutes after doors owing to my 3:00-4:30pm class, but still had plenty of time to buy a $30 shirt from the merch stand before JPEGMAFIA’s set. Peggy’s deadpan mannerisms in-between songs offered no hint as to the intensity of his abrasive, fragmented, alt rap bangers such as “Jesus Forgive Me, I Am A Thot,” “Baby I’m Bleeding,” “I Cannot Fucking Wait Til Morrissey Dies,” and “BALD!” As the titles of these songs make clear, Peggy has a great sense of humor to go along with his abilities as a performer, performing an a cappella cover of Carly Rae Jepsen’s “Call Me Maybe” to the delight of the crowd, and engaging fans in chants of “Fuck you Peggy!” It also helped that the mosh pit was simultaneously one of the craziest and most polite pits I’ve ever been in. During Peggy’s set-closing cover of Denzel Curry’s “VENGEANCE,” some rando accidentally punched me in the collarbone and immediately started apologizing profusely, and the pit stopped several times to help people look for lost belongings and regain their footing after falling. This positive energy continued throughout the night, and I did not have the same trouble with thuggish frat boy types at this show as I did at Denzel Curry.

After a brief intermission, Snail Mail took the stage next. Her set was about as far removed from the intensity of JPEGMAFIA’s set as you could get. While initially I thought it would make more sense to have her as the first opener, I appreciated the break from moshing so that I could better save my energy for Turnstile’s set. I have absolutely no knowledge of Snail Mail’s discography, but I will be making it a goal of mine to listen to more of her music going forward. Her fun, laidback brand of indie rock is something right up my alley. Much like JPEGMAFIA, her humorous asides between songs contributed to the positive and easygoing vibe of the entire show. Also, adding “as fuck” to the end of every sentence definitely gained her points in my book.

After baited breath and a brief prelude of Whitney Houston’s “I Wanna Dance With Somebody,” Turnstile finally took the stage. The thrumming bass intro of “HOLIDAY” provided everyone with time to prepare for the batshit insanity about to ensue once the guitar and drums came in, and the crowd kept that same energy throughout their entire, scorching set exploring most of their discography, but with emphasis on 2021’s GLOW ON. I saw probably about 20 different people crowdsurfing at various points, and although I didn’t join in, in retrospect I wish I did. Frontman Brendan Yates’ animated performance and exaggerated movements made it clear that this show was all about one thing, having fun. I felt that positive energy not only in the insane moshing during songs such as “Real Thing,” “I Don’t Wanna Be Blind,” and “DON’T PLAY,” but also during the laidback swaying of the crowd during “ALIEN LOVE CALL.” The highlight of the show, for me, had to be standing about 10 feet away from the stage during the final two songs of the set, “MYSTERY” and “T.L.C.”

Unreal, otherworldly, and transcendent are a few of the words that come to mind when trying to describe this indescribable experience. Turnstile’s music, especially their older songs, reminds me of an updated version of the punk, metal, and alternative that I listened to so much in middle school and early high school but now wouldn’t dare to admit I liked. This is the kind of show 17-year old me dreamed of going to, but never got the opportunity to attend. There’s something for everyone to enjoy at Turnstile’s shows, and if you see that they’ll be playing in your area, BUY THOSE TICKETS.