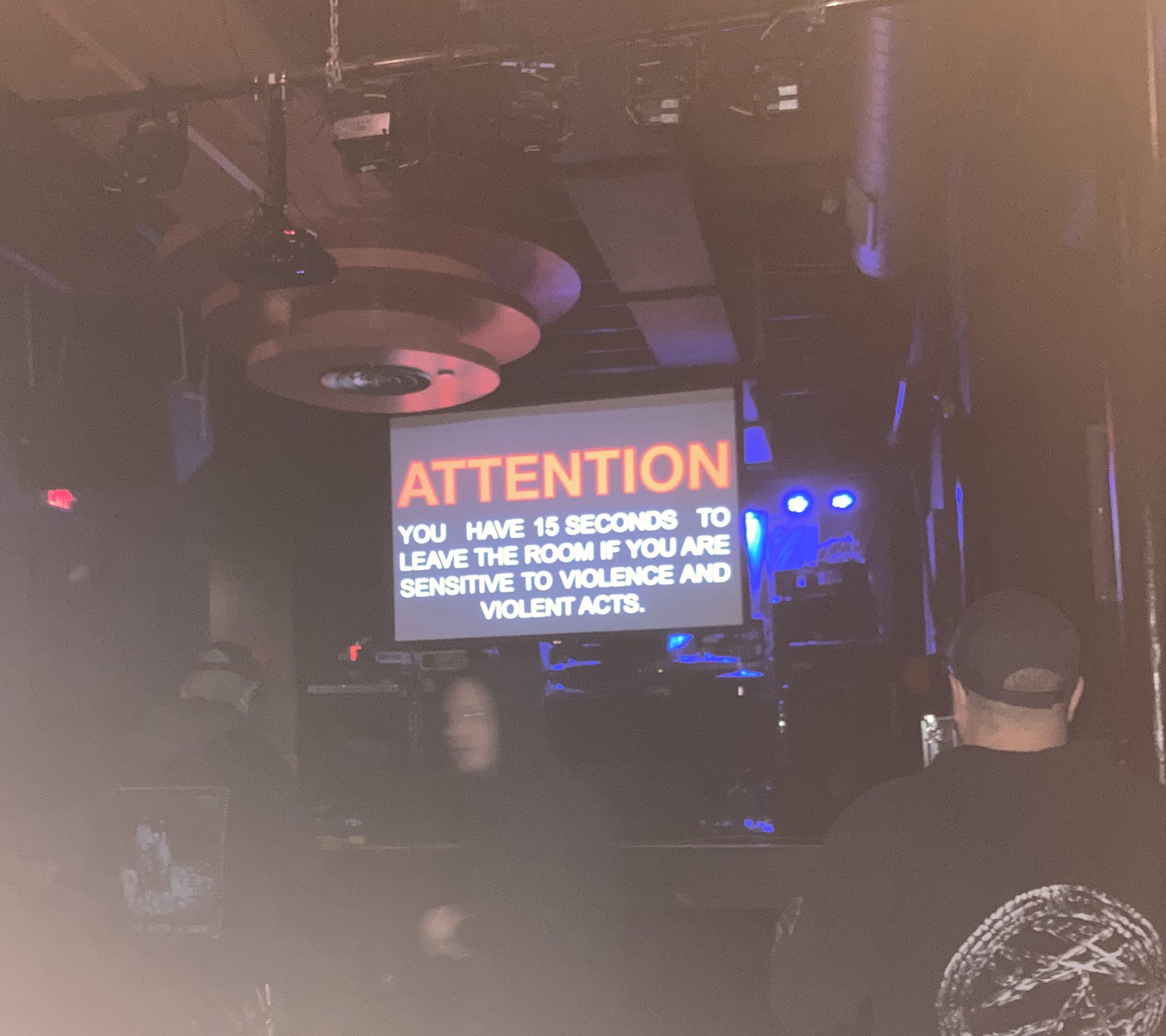 5 bands, 25 dollars, 3 hours. My ears rang, visions of long sweaty hair, bald patches, and ripped shirts still danced around my head as I closed my eyes to dampen the overstimulation and absorb the UFO riffs streaming into my ears. My heart palpitated in time with Blood Incantion’s 18 minute epic, Awakening from the Dream of Existence to the Multidimensional Nature of Our Reality (Mirror of the Soul). In front of me the crowd’s heads nodded along in sync, though each head with their own unique style.

Before this moment, three other bands (all touring their new albums) had performed equally enthralling sets; God is War – a power electronics artist with punishing and heavy beats with no shortage of noise and distortion, complemented by custom visuals and a text narrative on the screen – was touring his album Predation Perfected (2022). Mortuous, a classically death metal death metal band played half of their heavy new album Upon Desolation (2022), and Vermin Womb, a deathgrind trio featuring Ethan Lee McCarthy of Primitive Man, promoted their new album Retaliation (2022). Coming from the high altitudes of Denver they sold haunting merch that found the intersection of Junji Ito and Scary Stories to Tell in The Dark. Still coming next, Mid-Atlantic’s own experimental grindcore band, Full of Hell.

To be perfectly clear, I don’t carry much knowledge of metal beyond the Carcass tracks my dad used to overlay my homemade movie’s fight sequences. Still, I was enthralled at Aram’s reverence at the line-up, and value of the ticket.

Much to my delight, earlier in the week my friend Andrew had mentioned he was also going to the show. Due to HAIR rehearsals, he had to miss the first three acts but came just in time for Blood Incantations exploratory shreds.

Remembering wisdom of the past (Daylanne English kindly offering me earplugs from her office) I plugged my ears up but remembering advice from my dad (take them out briefly just to experience the extremity of sound) I toggled back and forth from popping a plug out and quickly shoving it back in. The angel and devil on my shoulders worked in tandem to ensure I still be able to hear the intricacies of music down the line but also that I might experience them now. Despite being in the back of the venue (did I mention this was at the Turf Club, just a quick ride down the A-line?) the raw sound drumming my ears was intense.

As the Coloradans known as Blood Incantation finished up and thanked the Minnesotans for coming out, the Mid-Atlantic’s Full of Hell started to set up.

“Gawsh he’s a little gorgeous,” Andrew whispered to me as the bassist began tuning his instrument. As their first song started, the vocalist Dylan Walker began moving around the stage in jerky motions, using both high and low space in an enchanting way. As the song ended Walker turned to us, flashed a smile and asked how we were doing. Witnessing the quick turn of Full of Hell from aggressive, dog-like vocals to a cheeky and charming frontman made both of us blush.

Full of Hell’s set was short and ended abruptly, though not lacking in any quality. As we streamed out of the venue the energy around us was electric and the merch line quickly began to stretch out.

Andrew, Aram, and I reveled in our excitement as we made our way back to the car. Stone cold sober but red hot with feeling, we piled into my little black Yaris and remarked on the animation of the performances.

I can’t in good conscience call myself a metalhead, but damn if I’m not gonna wear my Vermin Womb shirt around with pride.